A beach in Plymouth, Massachusetts, had been fishing exceptionally well in the fall for the past few years. The previous season, Bill Hassan figured that we’d fished there 28 days between September and October, landing dozens of striped bass, some of which measured nearly 40 inches on my rod. We had become regulars at Riptides Grill & Bar.

I was in my late thirties, a fishing bum without a trust fund. But I had an idea. I’d rent a house near the beach for two weeks in the thick of it. I could fit three groups of three anglers for three days each. If it wasn’t happening out front, we’d drive the coast, looking for birds. This would not be a luxury-vacation package. There’d be no champagne between tides, no shore lunch, and dinner would be at Riptides, where pub food ruled the menu. This would be about the fishing.

In May I found the house. It was a three-bedroom ranch that sat two streets up from the beach. It was owned by a retired Boston firefighter and his wife. It was nothing special, no rose-clad cottage with an ocean view, but it would do. We’d only be using it to sleep. Each angler would have his own room. I’d zip into a sleeping bag on the sofa. There was a fireplace. And the offseason rate was good. I gave the firefighter a check for the entire amount.

I had a website then and a fairly extensive mailing list. But I wasn’t going to offer this to just anyone, especially anglers within easy driving distance or ones who would pay this year, and then next year rent a house themselves, bringing their own friends to take over the beach during prime time. I wanted trusted clients from afar. If they flew in I could pick them up at Logan or Providence.

I did a mailing—a straightforward letter, no photos. I was selling the steak rather than the sizzle.

I pitched it to Gary over the phone. Gary was a commercial pilot from Vermont. He had bought a bunch of stuff from my website, and I had done some custom tying for one of his trips. He really liked my interpretation of Borski’s Bonefish Short; he couldn’t reach Borski to buy originals.

“I’ve caught some of the biggest bass I’ve taken right off this beach with a floating line and a hair-headed fly,” I told Gary. “I don’t want to oversell it, but this is world-class fishing.”

Gary was very interested and thought he might book a week for himself. The money would be great, I thought. I was talking on a fitness forum with a woman named Lori. Things were getting interesting, and I was thinking about flying down to Atlanta to meet her. Gary’s check would cover that.

Time passed and the small window closed, with no takers. I was thinking I had played it too conservatively with the promotion. I sent a few more effusive emails, made some desperate calls—a couple of bites, but nothing.

Saturday was move-in day, but I didn’t move in. I had my fishing gear in the back of my Isuzu Trooper, but that was about it. No bag of clothes. Just my sleeping bag.

The small parking lot above the beach was empty. A couple of people were walking their dogs along the shoreline, but there was no one with a fishing rod. Just me.

There was some bait in the water, peanut bunker, but not the glut of previous years.

An hour and a half of casting produced a single fish, a 20-inch schoolie. Not a fish anyone would cross the country for. Not a fish you could make a living from.

At Riptides, Dail put a beer in front of me. “Where are your friends tonight?”

“Dail, can you put something else on?” said a guy down the end of the bar, motioning to the television.

“There is nothing else,” Dail said.

Even though there was no one else in the house, I slept on the sofa that night. I was already planning to get out of there at the end of two weeks without having to make a bed or wash a dish.

Just after sunrise, I stopped at the beach before heading home. It was pristine, but nothing moving. I didn’t even put my waders on.

It was just as well no one had signed up. While the nation reeled over the terrorist attacks, my worries were closer to home. My father was going to the bank every day. Why? He always kept his spending cash in the pocket of a coat hanging in his closet. When I went through all the pockets of all of his coats, I found nearly $1,500. I’d also found a couple of cans of dog food in the pantry. The thing was, we didn’t have a dog.

When I did go back to the beach house, later that week, there was $150 sitting on the kitchen table next to the unopened bottle of Cruzan Single Barrel I had bought for the clients I’d been expecting. Bill and Sheila had stayed there one night, and Bill had left the money to help with expenses. No fish, Bill’s email had said.

That was before my father’s death, my marriage to Lori, nursing school, hospital jobs, house and mortgage, graduate programs, and the small office I occupy today in an outpatient clinic, as far from that beach as you can imagine, if only about 30 miles.

I still stop by the beach once in a while in September, and sometimes I string a rod and walk down to the water. But the fishing has never been the same. 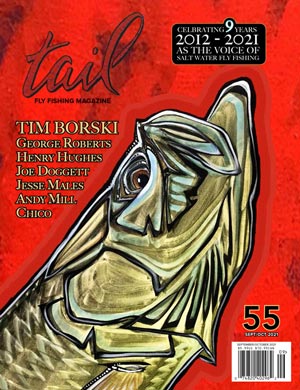