I’m wandering the beaches again on an early April morning, looking for California corbina. I walk three beaches for about  7 miles, looking at structure and looking for fish. The third beach doesn’t show much promise until I’m about to leave. I look down and see two corbina sitting right at my feet like a pair of silver ghosts. They immediately blow up and run for deeper water.

Okay. We have some fish here, and it’s the early season. Soon I see a pair of fish, then a triple, and finally a pair in the distance. I line up a cast at an angle and slightly past them. I’m fishing a fly I developed for sight fishing, a bright pink Surfin’ Merkin. I can see the bug in front of the fish. A couple of quick strips puts the fly right in the distant pair’s path, and I let it sit. My type-6 line is on the bottom, the bug is anchored, and I have a good position.

As soon as the fish near the fly I start bumping it to look like a burrowing sand crab, which causes the fly to kick out puffs of sand, its legs simulating the paddle legs on the real thing. Both fish begin to follow the bouncing fly, and eventually one lunges ahead of the other to eat. I watch both fish and fly to judge when to set the hook. As soon as I see the fish lunge and arch its back and the pink fly disappear, I know it’s on.

Immediately both fish blow up and flee to deeper water. The head of the hooked fish is shaking all the way into the backing. Montana-based Sweetgrass Rods designed this bamboo rod for me, specifically for this fish—and it’s a great stick. The click-and-pawl reel is screaming now, and the bamboo is bouncing with each shake of the fish’s head as I clear the backing. Eventually I surf the corbina in on the waves and slide it onto the wet sand for release. The overhead light brightens the purple iridescence of its back and the chrome sides. The bright pink fly looks like a wad of bubble gum stuck to the fish’s lip.

This is the season’s first fair-hooked, sight-caught corbina—a fish to which I’ve been addicted for a very long time.

Corbina, which run from California’s Point Conception down through the west coast of Mexico, tend to show up with the mole crab beds in the spring as the sand pushes into the beaches. Although the season generally runs from April to August, the unique and challenging corbina are really only available for surf sight casting in the summer. You can fish for corbina blind. You can also cast to suspicious swirls or short sightings—what we call vicinity casting. But the real deal is sight casting and actually watching corbina eat your bug. Corbina are easy to snag, so most of us only count fish hooked in the lip.

A lot of factors need to line up for a good shot at sight fishing: good sun overhead, no fog, good structure, low wind, and solid sand crab beds to hold the fish for a while. But great conditions aren’t guaranteed, so you have to work with what you have; when the stars do align, however, sight fishing for corbina can be awesome.

I’m always scouting locations, looking for beaches that are cut up with structure like buckets or troughs, which will fill up at different tidal cycles. As corbina push in looking for a meal, they’ll pile up in some of this structure, which gives the angler a better opportunity to present a fly. Scouting multiple beaches at low tide can pay off when I find one that is set up better than others.

Troughs will have lateral current, and corbina typically feed into it. Anglers can follow a fish and get multiple presentations. My favorite is a trough that dumps into a bucket and turns 90 degrees out to the ocean with a flat right next to it. The fish will pile up at that corner and hop onto the flat to feed before rolling back to the deeper corner water. 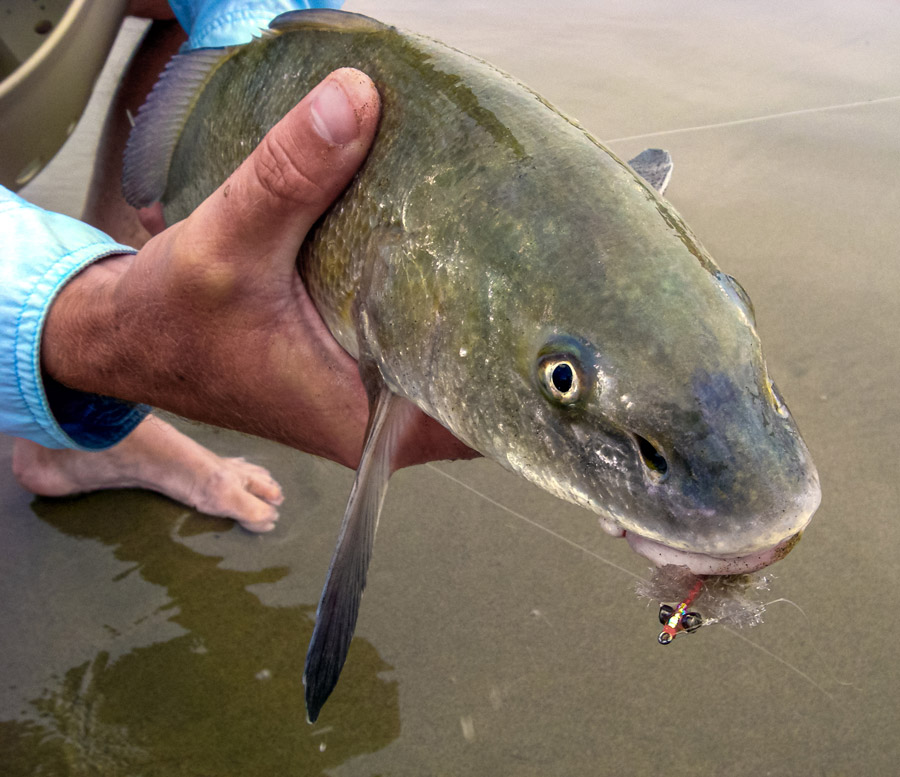 Some sections of beach will be structured more like a flat, and water will push in a sort of sheet. In this situation, fish will sometimes ride that water in with their backs up out of the water, feed, and then leave with the tidal recess. Swirls, backs, and wagging tails clue anglers to the presence of fish. Without structure like buckets and troughs, you may have a short window to present before the fish has fed and left.

Most of us sight fishing for corbina use rods from 4-weight to a 7-weight with a variety of lines: 30-foot sinking head integrated lines for most situations, intermediate heads for calm days, and in rare instances floating lines.

The fish will swim right over the sunken head. You can use a larger-test leader and pull on the fish harder to get them in quick. If you are fishing a sinking line, give it a test cast and see how much the line swings in the current before anchoring in the sand. This will give you a rough idea of how much to lead the fish to avoid presenting the fly on top of them or behind them.

My go-to sight-casting fly is a pink Surfin’ Merkin, which is based on the Merkin permit fly. The Surfin’ Merkin has been tweaked to make the fly look and act more like a burrowing sand crab. It is also pink (rather than Merkin gray) for improved angler visibility, which doesn’t seem to bother the fish. You’ll see that bright salmon pink at a distance and at some depth in structure. Being able to see the fly and the fish greatly improves your odds of getting a grab and setting the hook.

I mentioned a bamboo rod earlier; over the years I’ve migrated to slower rods because most of this game is in close—as in 5-to-30-feet close. No kidding. A corbina will sometimes follow my fly until its head is out of the water at the sand’s edge before eating. So I often have to cast with part of the fly line’s head still inside the rod. I’m not casting to the fences here, so a slower, more accurate rod works better for the close game.

Sight fishing for corbina in the California surf is by nature a tricky and local endeavor—and for these reasons a like-minded community has developed around this fishery over the years. Initially there were just a few of us nuts out there; now there are more. Those interested in giving corbina a try might enjoy my friend Al Quattrocchi’s book The Corbina Diaries, which covers the history and techniques of this game. 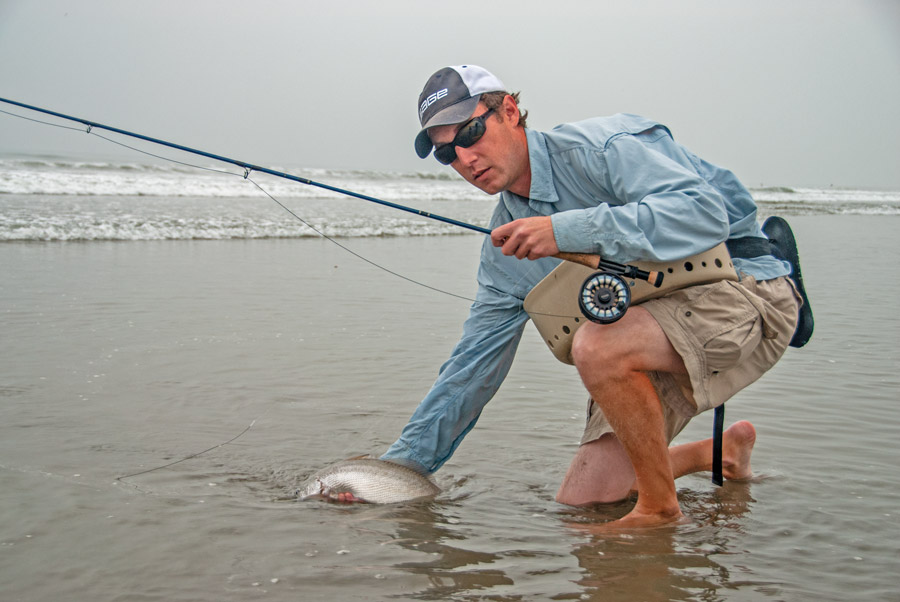 For many years we used to fish a spot we shared with an older spin fisherman named Matt. Initially he was a bit grumpy when we took to fly fishing in his area of operation. He fished live sand crabs and wore a hat right out of the Crocodile Dundee movies, so we nicknamed him “Corbina Dundee.” One day I was sight fishing a single fish that was ping-ponging between a group of swimmers on its right and left. Matt, who had finished fishing, was busy watching. I couldn’t get a good presentation. My only option was to lob out a cast perpendicular to the fish’s travel—and sure enough, the fish turned 90 degrees and followed the fly. I kept slowly bumping it all the way to the edge of the waterline, and my fish ate the fly with part of its head out of the water before screaming off to the deep. Laughing, I looked to Matt, who had observed the entire incredible show.

Sight fishing corbina in the surf isn’t easy, but the cool people and the crazy fish keep me coming back. And even if you strike out, you get a nice walk on the beach out of the deal.

Bio: Paul Cronin has been fishing local California beaches for 20 years. When he isn’t fishing, he designs and builds robots in his workshop. 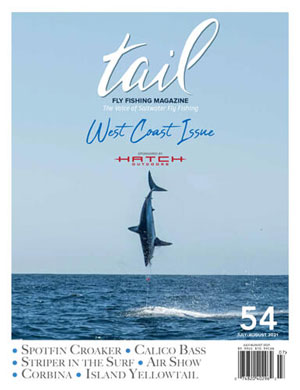